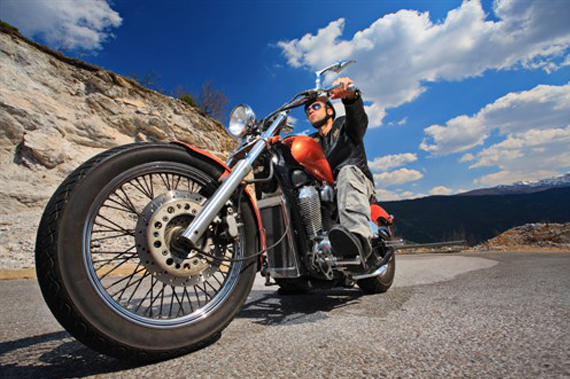 You’ve waited for it all year: a sunny summer day, not a cloud in the sky, and nothing between you and the horizon. Sounds perfect, right? Think again. In the middle of summer, temps can easily soar into the 90s—and higher—and to ride in that kind of heat requires a little bit of preparation and forethought.

Don’t be one of those riders who inevitably succumb to heat stroke each year. Follow these tips to beat the heat during this summer’s riding season.

Cover Up -- The fastest way to a sun stroke is by exposing your body directly to the sun. Your head, face, shoulders, legs and core are ready and willing to soak up as much of the sun's rays as you can throw at them and the more exposure you allow, the sooner you'll become a victim of the dreaded sun stroke.

Wear Vented and Mesh Gear -- Don’t be tempted to ditch the jacket and ride in only a t-shirt—vented and mesh riding gear will do a decent job of helping you stay cool as long as the temps aren’t reaching into the 90s. By allowing air to properly flow over your skin’s sweat, you’ll actually create a cooling effect that works quite well when temps are in the 80s.

Invest in a Vest -- When temps rise into the 90s, turn to cooling gear such as an evaporative vest to help with the heat. Built with a quilting mass of PEF (Polymer Embedded Fibers), the vest takes about three minutes to hydrate fully by soaking it in water and can retain water up to 20 times longer than a typical t-shirt. Because it’s a vest, it’ll leave your arms bare, and your body uses the heat coming into your arms and legs to manage your core temp of 98.6 degrees. Some cooling vest systems even include zip-off sleeves for when the air temperature gets above your body temperature. Don’t be tempted, though, to wear the sleeves when it’s not above 98.6 degrees. If you do, you’ll lessen your body's ability to manage your core temp and you can actually drop your core temp below 98.6 degrees, which can cause unpleasant flu-like symptoms including dizziness.

Wear Wicking Materials -- A synthetic wicking t-shirt will do far more good than an old biker or concert t-shirt. The beauty of polyester synthetics such as intera yarn, rayon and others is that they wick excess heat away from the body, making them a perfect garment when worn alone under your jacket on a hot day or an excellent transfer vehicle when worn between your body and an evaporative cooling vest. The other advantage to a synthetic wicking shirt is that eventually the air is going to cool down and you’ll be craving the warmth of a dry shirt rather than one that’s soaked in sweat. Synthetic wicking t's typically dry out three times faster than natural fibers, allowing you to manage your core temp better.

Stay Hydrated -- We hear it all the time – be sure to drink lots of water. And you should, at least a few liters a day while in the saddle. How you choose to do it is up to you. Some like to use a bladder system like a CamelBak, while others are content enough just sucking down a few ounces at each stop. However you do it, do it. But did you know you could over-drink yourself into dehydration? Drinking excessive amounts of water (beyond a gallon a day) will force your body to sweat and/or pee out wanted electrolytes that balance the brain’s ability to manage bodily functions.

Add in Electrolytes -- To avoid accidentally dehydrating yourself by drinking too much water, add in electrolytes. Be careful, though—the fancy energy drinks that purport to replenish your electrolytes are surprisingly full of sugar and oftentimes caffeine, both ingredients that lead to additional dehydration. Gatorade, Red Bull, PowerAde and others do more harm to motorcyclists than good, especially if you're diabetic. Instead, bring along for the ride an add-in electrolyte replacement such as Elete that replaces four different electrolytes along with magnesium and chloride—just add it to the water you’re already going to drink and you’re set!