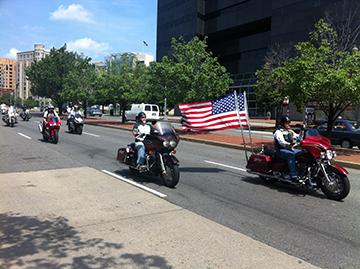 Why is it that just when you think you’ve finally been invited to take a seat at the table with the rest of the adults, you discover it’s at the kids’ table where you’ll be sitting and you’ll be alone—at least if you’re a motorcyclist and the table is owned by the Federal Highway Administration.

For reasons that are completely unclear and appear to be not only arbitrary but also counterproductive to the intent of the law, the Federal Highway Administration (FHWA) announced that it was moving forward with accepting nominations and seating the members of the newly reformed Motorcyclist Advisory Council (MAC). Unfortunately, FHWA is only allowing one seat out of the ten council positions for dedicated motorcyclists.

As reported to us by Megan Ekstrom, Vice-President of Government Affairs for the Motorcycle Riders Foundation (MRF), the MAC is the only formalized dialogue machinery between the motorcycle community and DoT officials. When it was first formed back in 2005 as part of that year’s highway bill (commonly referred to as the Safe, Accountable, Flexible, Efficient Transportation Equity Act: A Legacy for Users, or SAFETEA-LU), the Council’s purpose was to share rider experience with the FHWA and provide input on topics such as roadway deigns and construction, barriers, intelligent transportation systems, and other emerging issues and their impact on motorcyclists across the nation.

While the original MAC was dissolved in 2009 when SAFETEA-LU expired, it was reinstated and signed into law at the end of 2015 as part of the FAST Act. All seemed well, as America’s motorcyclists would once again be interacting face-to-face with federal transportation and highway officials and be directly involved with discussions on policy that directly impacted the motorcycle community. And while the makeup of the soon-to-be-reinstated council was not defined in specifics by the language of the FAST Act, there was no reason to believe that it would deviate significantly from the original 2005 MAC.

Assumptions are always a dangerous critter, and even more so in our nation’s Capitol. To minimize the chances that the MAC might end up with a makeup of members inappropriate to the council’s mission, lawmakers attempted to impress upon the FHWA how important the inclusion of motorcyclists was to the makeup of the new MAC. In June of 2016, Congressmen Reid Ribble (Republican, Wisc.) and Mark Pocan (Democrat-Wisc.) penned a letter to the Federal Highway Administration encouraging the agency to adopt similar language found in SAFETEA-LU when determining the participants of the Motorcyclist Advisory Council. Specifically, the letter called on the Federal Highway Administration to ensure that the, “Motorcyclist Advisory Council include participants from the full spectrum of available experts and stakeholders of different organizations.” The letter went on to suggest explicitly which participants should be involved and calling on the Administration to include, “one member recommended by a national motorcycle riders foundation” and “two members of State motorcyclists’ organizations.”

In addition to the Congressional letter, senators from South Dakota and Alaska questioned Anthony Foxx, Secretary of Transportation, in a congressional hearing about participation in the Motorcyclist Advisory Council and directed him to previously agreed upon language in SAFETEA-LU.

Turns out, the Federal Highway Administration doesn’t seem to want actual motorcyclists at its table after all. If you look carefully at the agency’s notice for applicants to serve on the MAC, it is only requiring that one member be a rider while all the rest may be non-riders as long as they have a background in certain areas of knowledge such as engineering, public safety, road design or other related fields.

According to FHWA Docket No. FHWA-2016-0033, entered into the Federal Register Volume 82, Number 5 on Monday, January 9 of this year, the MAC will be comprised of individuals who have knowledge of barrier design, road design, construction and maintenance practices, and the architecture and implementation of intelligent transportation system technologies.

The FHWA goes on to claim that, “The MAC seeks to have a fairly balanced membership with expertise in highway engineering, safety analysis, and motorcycling.” Specifically, they are looking for members who are:

While council members will ultimately be chosen by the Secretary of Transportation based on the applicant’s professional or academic expertise and experience, gone is the original requirement from SAFETEA-LU that multiple members come from motorcycling organizations and foundations. Rather, the overwhelming voice for the Council appears to be that of safety experts and engineers, and while those individuals will certainly be welcome, the makeup of the Council is far from fair and balanced. This is a major deviation from the previous MAC where participants included one member recommended by a national motorcyclist association, one member recommended by a national motorcycle riders foundation, and two members of State motorcyclists’ organizations.

This deliberate exclusion of motorcyclists from a council that was purposefully set up to represent the voice of motorcyclists has to be called into question. How is it possible for a dialogue to exist between the motorcycle community and the federal authorities when only one voice out of ten is speaking from a place of riding experience?

The sad reality is that without proper inclusion no real dialogue between federal policymakers and motorcyclists can exist. Like an ignored child pushed aside to eat alone at a holiday dinner, without the necessary inclusion in the MAC motorcyclists will be relegated to a lonely seat at an empty table.

So what can be done at this point? While the nomination process will likely be closed by the time you’re reading this, it’s not too late to have more motorcyclists included in the MAC membership. Reach out to your members of Congress and ask them to tell the Federal Highway Administration to follow the original language of SAFETEA-LU in regards to the current incarnation of the Motorcyclist Advisory Council. By making a respectful noise in regards to motorcyclists’ input being included in the MAC, perhaps we can reclaim our seat at the adults’ table.