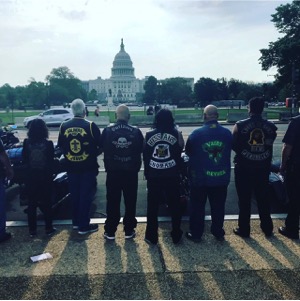 This past May, scores of riders from the motorcycle community traveled to Washington, D.C. to connect with elected officials from across the country in support of motorcyclists’ rights. Hosted by the Motorcycle Riders Foundation (MRF), the annual “Bikers Inside the Beltway” is the only advocacy day in the nation’s capital hosted by riders, for riders.

Over 160 people participated in this year’s event; a 60% increase in the last two years. For many, it was their first time. “It was truly an honor to represent my Club,” said one attendee from a military motorcycle club, “[these are] such important issues that affect hundreds of thousands of riders,” he went on to say.

Thirty different states were represented in Washington, D.C., which resulted in direct contact with over 300 offices on Capitol Hill.  Members of the MRF brought their bikes as well as their personal stories from back home to Capitol Hill and discussed issues critical to the 2018 legislative agenda. Among these included support for the anti-profiling measures in the House and Senate, concerns over ethanol and the lack of consumer education at the pump, as well as a push to bring the RPM Act and SELF-DRIVE Act to the floor for a vote.

Every meeting that was attended marked another critical step forward in building and maintaining relationships with congressional offices, and each meeting provided the opportunity to communicate directly with a wide array of lawmakers who are currently considering legislation that would affect the rights of motorcyclists.

Lawmakers and staff got a double dose of motorcycles on May 15; hosted in conjunction with Bikers Inside the Beltway was 2018’s first Congressional Motorcycle Caucus Event. Featuring rider education and training professional Stacey “Ax” Axmaker, a setup in the Rayburn House Office Building allowed attendees to experience a motorcycle ride via Virtual Reality Technology. Several elected officials participated along with dozens of staffers.

“This year’s Bikers Inside the Beltway was our most successful yet,” said Kirk “Hardtail” Willard, Chairman and President of the Motorcycle Riders Foundation. “Attendance, preparation and participation were phenomenal. Our elected officials knew that the bikers had come to town and with few exceptions we were welcomed as a key stakeholder on issues that affect transportation, the environment and the entire rider community. The impact of this day is felt long after the bikes roll out of town.”

About Motorcycle Riders Foundation
The Motorcycle Riders Foundation (MRF) provides leadership at the federal level for states’ motorcyclists’ rights organizations as well as motorcycle clubs and individual riders. The MRF is chiefly concerned with issues at the national and international levels that impact the freedom and safety of American street motorcyclists. The MRF is committed to being a national advocate for the advancement of motorcycling and its associated lifestyle and works in conjunction with its partners to help educate elected officials and policymakers in Washington and beyond.